The concept of project dynamism was defined in Project Management Approaches for Dynamic Environments.


Rothwell and Zegveld say we are in the midst of a technology explosion [4]. As far back as 1985 they claimed 90% of our technical knowledge was generated in the last 55 years, and that 90% of all the scientists and engineers who ever lived were still alive and working. Their prediction was that:


technical knowledge will continue to increase exponentially, doubling every 30 years

Perrino and Tipping reported “the pace of technology is accelerating, raising the stakes and risks for managing innovation, and requiring early warning and shorter response time..” [5]. Change, in all forms of technology and business processes, can be regarded as increasingly pervasive and providing challenges even where high technology is not core business. For example, mining companies depend heavily on rapidly changing IT systems [6], and the Australian Submarine project was significantly challenged by the rapid computer developments during its 20 year lifespan [7].

A dynamic project environment is taken to mean one in which there are high levels of change in anything the project is dependent on. This is usually an environment where the proportion of unknowns at the start of a project is high, and the amount of adaptation required as the project progresses is high. A dynamic project is one that is necessarily subject to significant change as it progresses, due to rapid changes in the environment in which the project is conducted. Dynamism is linear, not binary. The change has to be rapid because otherwise it can be dealth with using normal change management processes, that are part of traditiona project management. It’s a matter of degree.

Gray and Larson described how projects conducted in highly uncertain environments are a key unresolved issue in the future of project management [8]. They argue these projects present the following challenges:
So how do managers balance the potential predictability advantages of high detailed planning against the adaptability advantages of low detailed planning? Pich, Loch & De Meyer describe a type of project that exists in fast changing environments and how it best suited to what they called a learning strategy [9]. They argue that this is distinct from projects conducted in slow changing environments which are suited to what they call ‘instructionism’. The ‘learning’ approach involves more problem solving and scanning for unknown unknowns. They go on to describe circumstances where complexity makes planning so difficult that it is better to use an approach they called ‘selectionism’, where the most fruitful initiative is chosen after a pool of trials.

Turner and Cochran [10] espouse the ‘goals and methods matrix’ that describes four different types of project according to how well defined the methods and goals are. Projects can have poorly defined goals (‘Fire’) or poorly defined methods (‘water’), or both (‘air’). Shenhar and Wideman describe a type of project that involves high levels of uncertainty, using technologies together for the first time. They call these ‘high tech’ [11]. They also describe a type of project that actually creates new technologies, called ‘super high tech’. Shenhar describes how ‘low technology’ projects are typically performed in construction, production and utilities, and high tech projects in the computer, aerospace and electronics industries [12]. He offers building and bridge construction as examples of low tech projects. The key difference to Shenhar is the level of development work involved in that low tech projects have little and high tech projects have considerable levels, and usually require prototyping. Shenhar and Wideman argue that another key difference is the number of design cycles. In low tech projects they say there is typically only one cycle with a freeze before development, and with high tech there are at least two, typically three cycles [11].

Cioffi suggests that ‘projects’ be placed on a spectrum from project to operational [13]. I have adapted this idea in Fig1 to attempt to illustrate the sliding scale of unkowns that applies to projects. Unkowns in this sense refer to any aspect of the project, including the methods to achieve it, the objective, and the environment it has to operate in. Unkwowns in any of these areas can present significant challenges to a project. 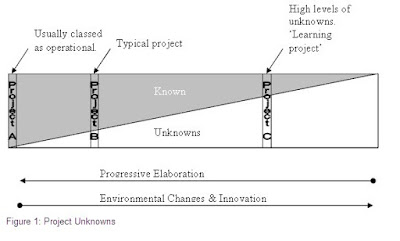 The Guide to the Project Management Body of Knowledge (PMBOK) [14] describes “progressive elaboration”, where planning is developed in greater detail as the project progresses. Using progressive elaboration to fill knowledge gaps, it might be possible to move a project to the left of Figure 1, thereby achieving the objective in a more predictable fashion. However, rapid changes in the environment, including tools and methods, and attempts to innovate, will push the project back to the right, increasing unknowns. The two forces of exploration and change act against each other continuously throughout the project. The challenge is to conduct exploration at a greater rate than the emergence of environmental change. It is also important to ensure that the amount of change created by the exploration and implementation is not counterproductive overall. An example of project A in Figure 1 might be a production line where a different button is pressed according to the colour required. The only unknown is the colour and it is resolved at the start. An example of project B might be a builder’s project to build a new house for a client. Some requirements are unknown, and some new materials may be required, and perhaps the unknown nature of the soil will affect the foundation design. Standards can be used to work out how to deal with most situations. Project C might be a software development project for a new business. The client is unsure of their own business processes, unsure of the market, but wants to achieve their objectives by integrating a number of cutting edge technologies.

Dynamic projects might poses some of the attributes of Shenhar’s high tech or super high tech categories with uncertainty at the start, but also include the very significant challenge of high levels of change along the way [12]. I argue that the dynamic projects can be significantly more challenging than even the high tech type. In a high tech project, once something is learned it generally stays learned. For dynamic projects, large proportions of the methods and goals are changed by external forces out of the project’s control. These changes recur endlessly throughout a dynamic project. In dynamic projects the effort to resolve unknowns at the start of the project is severely challenged by the introduction of new unknowns, because what is learned can easily become out of date in less time than it takes to learn it. Projects in this environment are more akin to staking worms than staking bricks. Table 1 attempts to outline the difference between operational work, project work, and dynamic project work. 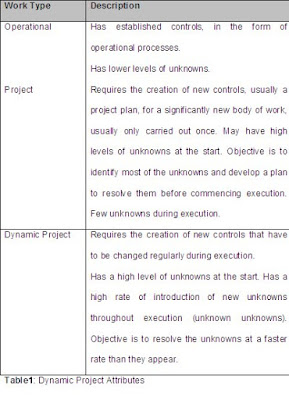